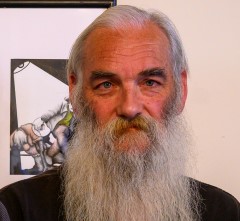 Dale Plew is a relative newcomer to the world of professional artists but his pen and ink drawings are an inspiration to both professional and amateur artists. His meticulous and detailed works deserve careful and considered viewing.

While Dale has worked in mixed media, including water colour, gouache, pencil and pen and ink, for many years, he is currently enjoying pen and ink. He believes this gives him more control than a medium such as water colour which can bleed. All Dale’s work is completed on very high quality paper. He questioned why you would spend many hours creating a work of significance on cheap material with poor quality media.

Dale first developed an interest in producing his own art in primary school when he began to read comic books, This lead to him copying cartoon characters because he was encouraged by friends. The use of comic books as initial inspiration has helped him develop a highly graphic style of drawing and this has been further refined by over 40 years working in the printing industry.

It has been many years since Dale first began drawing and then gave it up following his year 12 studies in the Tertiary Orientation programme in Technical Schools. This gave him the opportunity to study Art History, Photography, Painting, Graphics and English. He was obviously destined to follow a form of Art because he managed to sell all his year 12 creations to teachers at his school. However as so often happens life got in the way and it is only recently Dale has started drawing again.

Dale is now finding interest and ideas in many periods of Art History but has a particular passion for Durer as well as the Pre-Raphaelites. He hopes one day to be a competent enough painter to be able to paint the sorts of emotions and complex narratives depicted in many of the Pre-Raphaelite works. His casual music listening also provides stimulus for new work. It is quite common for Dale to listen to lyrics, capture an image in his head, complete a rough sketch then flick through books to find further information. He also finds he is heavily influenced by street artists because of the comic style graphic many use.

Although Dale’s formal art training is minimal he is on a constant journey to learn, develop his style and improve his teaching methods. Dale teaches drawing for the Arts Alliance and knows he must be well informed about his subject before he can teach competently. Don’t miss his classes at both the ‘Station Gallery’, Yarragon and Trafalgar Railway Station Artspaces.

You can see the range of Dale’s work at the ‘Station Gallery’ in the Mharch Exhibition called ‘Draw the Line’.