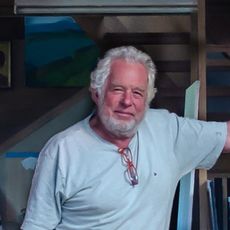 On the first day of Spring1944, Phil Henshall, now of Rokeby, was born. His life today appears to be a far cry from the many years he spent in the construction industry, running a specialist contracting business in partnership with a Yarragon identity Peter Mammolito. In 2000 after 20 or more years Phil closed the business to pursue his art career but maintained his connection with the construction industry by remaining in consultancy.

After matriculating in 1962 from Marcellin College in Melbourne Phil was faced with a dilemma: should he choose between art or architecture? He commented that ‘since I was competent at Maths, I chose Architecture. It seemed to offer a broader scope to my life and range of natural talents and interests. I ended up earning my bread and butter in construction.’ Thus followed study in Architecture at Royal Melbourne Institute of Technology during 1963 and 1964 while at the same time he continued to ‘play’ with paint and develop his interest in visual depiction. He dates his first solo exhibition, Continentspace, at Timesis Gallery in Mt Eliza in 1999.

When asked about formal art training Phil commented that apart from a short art course at the Caulfield Institute in 1969 he has ‘always been somewhat averse to others telling me how to do creative things’. This lack of formal art training does not appear to be reflected in the often massive, striking paintings Phil produces and he supplements his own knowledge continually by visits to galleries. He names his favourite painting as Tiepolo’s ‘Banquet of Cleopatra’ from the National Gallery of Victoria and reflects on the intense coilour employed and also the ‘obviously highly skilled, contrived and controlled scene which appears somewhat wrong in parts. It seems to have been done in part from both a tableau and an idea.’ His favourite and most inspirational period of art however is Australian art between the 1950s and 1970s. This interest and passion is obvious in Phil’s striking landscapes that he describes as often ‘exaggerated or containing a distorted perspective’.  It would therefore not surprise people to know that Phil is inspired by  Australian artists, Brett Whitely and William Robinson.

From the time he was gifted a box of oil paints from his mother when he was about 16 Phil has chosen to predominantly work in oils and still has the original box and palette and first painting. Before that he remembers drawing in pencil. He continues to use pencil as part of his creative process from ‘2.00am meetings with (himself)’, imagining the idea visually, sketching this on paper, sketching with charcoal on canvas, applying paint and finally signing it on successful completion or repainting. When describing his work, Phil uses the term Aspectivism.  Aspectivism, he states, is the manipulation of perspective (about space) in order to express the elapse of time and/or a moving viewpoint, as well as an aspect from an extreme or unusual viewpoint.

When viewing Phil’s paintings it is easy to assume they come effortlessly to him so it would surprise many to learn that he finds painting hard work. Over the years it has become slower, the application of paint even thicker and greater detail. The direction he now sees this taking him in the future is a ‘further exploration and expression of the element of time’ but also the inclusion of more humour. Phil’s emphasis on time seems quite compatible with his belief that there is an existence beyond death but this is something he believes would surprise many people who know him.

While Phil feels he is yet to ‘crack a decent prize’ in the art world his achievements would read as a daunting list to many. He describes his first highlight as a drawing of a Moreton Bay Fig included in the Exhibition Gardens as part of one class on art. During the ‘Show and Tell and Assess’ (where works were all pinned up on the display board) he didn’t recognise this as his and was ‘blown away’ with the degree of skill of someone else. He received a 10+. Since that time he has been shortlisted, highly commended and prize winner for numerous awards such as Daffodil Day Arts Awards, John Leslie Art Prize (Gippsland Regional Art Gallery), Flanagan Art Prize (Ballarat), Tattersall’s Contemporary Art Prize (Williamstown Festival), Aurora Australis Art Show.

Phil has also developed a formidable reputation through his many solo and group exhibitions, some locally in Neerim South, Meeniyan, Warragul, Tonimbuk, Drouin and more recently in the Quadrant Gallery in Hawthorn. Perhaps he will achieve the goal he dreams about and that is he will one day paint two works that will be remembered in 300 years time.
If you wish to see Phil’s work and the manner in which he manipulates perspective in order to express the lapse of time or a change in viewpoint see his works on www.philhenshall.com.au