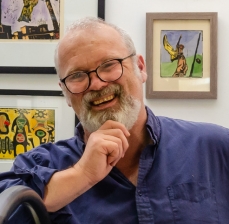 Russell Lilford is a contemporary printer with an impressive Curriculum Vitae which contains a number of formal art qualifications, art awards and academic positions in a range of tertiary institutions.

Evident in his formal academic roles from the late 1990s to 2010 is an intense involvement in the Department of Art and Design at Charles Darwin University, Darwin, the Northern Territory.  Russell was a course co-ordinator and lecturer  in the Vocational Educational Training programme, lecturer in painting, drawing, sculpture and art theory, responsible for co-ordinating and hanging graduate shows and a variety of other art exhibitions.

At the time Russell was lecturing he also worked as the Arts Co-ordinator of the Larrakia Nation Aboriginal Corporation, Darwin. These days he lives in Gippsland with his family and works as a full time artist.
His journey has been a long and interesting one from the time he was 11 in 1975 when his dad took him to the Mildura sculpture triennial which left a particular idea imprinted on him. This was the concept of freedom of expression that was to re-emerge in his early twenties.
In 1985 Russell completed the Tertiary Orientation Programme  Foundation Year Art at Prahran College and this gave him the fundamentals of contemporary  art practice, a further step in what he refers to as “an amazing journey that continues to unfold.” He graduated in 1998 with a Master of Fine Arts from Northern Territory University and this gave his art a greater degree of sophistication.
Through his academic pursuits in the world of fine arts Russell has, in his words, been  “influenced by the usual suspects, Van Gogh, Picasso, Cezanne, Kandinsky, Monet , Duchamps, Bueys , Brancussi; major art movements such as DADA , Expressionism, Surrealism, Fauvism, Constructivism and Post Modernism.” Russell said that the belief these artists had in their work and the passion they demonstrated encouraged him to apply their ideas to his own art but to make sure he contextualized it for his work and life.

Drawing, painting in oils, water-colours and acrylic and printmaking in relief woodcuts and lino have all played a part in Russell’s journey in the world of art. Today, however, his work fluctuates between printmaking and painting; printmaking helps him simplify Ideas and hone in on what he wants the image to really say. Although Russell takes inspiration from life around him and speaks highly of the artists who have captivated him he is also influenced by a current interest in alchemy as a philosophy. Through his prints he seeks to examine the many symbols of alchemy in the context of urban life.

Reading this so far one could assume Russell is a printmaker and that is the end of his story. However he has an incredibly rich experience in performance art from performances in the early 90s influenced by the European Dadaist movement that enabled him to critique the art establishment to a later performance in Darwin titled ‘Blood of a Nation’ in which he explored the colonial treatment of our first people through to current treatments of refugees and indigenous people.

With such a background, rich in ideas, Russell’s process of expression is not flippant. He produces many sketches when considering a new project, looks at what is best and will translate to the medium he has chosen then works to a deadline so long as he continues to believe the idea is worthwhile.

No artist is ever just the sum total of their work and this is certainly the case for Russell. Despite his extensive academic career Russell has enjoyed a variety of roles within the indigenous community. He worked as cook and caterer with the Jurrawun painters from the East Kimberley (Paddy Bedford, Rusty Peters , Freddie Timms, Phylis Thomas  Goodie Baret and Peggy Patrick) and shared a house with this mob of painters in Darwin while they were working at Northern Territory University. This allowed for some exchange of cultural understanding and ideas behind their work and Russell counts this as one of the highlights of his career. Another highlight at this time was having a photo of his performance art piece on the front page of the Northern Territory News. Russell has also worked with the Neminuwarlin Aboriginal Dance Group as cook and production assistant. In 2006 Russell was art coordinator for the Larrakia Nation Aboriginal Corporation; the Larrakia are the indigenous people of Darwin.
It was his fifteen years in Darwin working with the indigenous mob that brought to Russell
a profound realization that art is much greater than the aesthetic. Indigenous art has a direct link to the land or environment, spirituality, place and being. The majority of aboriginal art has a deep and pure sense, an intricate and real presence of connection to the land its people and culture. Quite obviously the white fella art does not have this same connection. I believe that we are able to learn and interpret and apply these insights to our contemporary art making practice with respect to our indigenous counter parts with them showing us the way through their art; we must learn to translate and find meaning in the stuff we call westernized world, and the art machine that accompanies it.